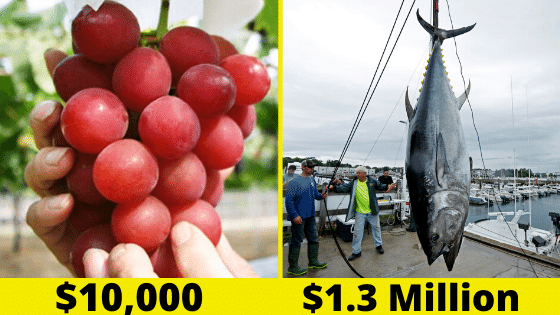 In this article, Blogkart offers you a chance to explore the most expensive foods in the world from different cultures with different cuisine and taste.

Some food can be found everywhere and can fit into the common man’s budget, but some don’t.

Let’s explore the most expensive foods in the world which might be out of your budget but they worth a try for a lifetime experience. 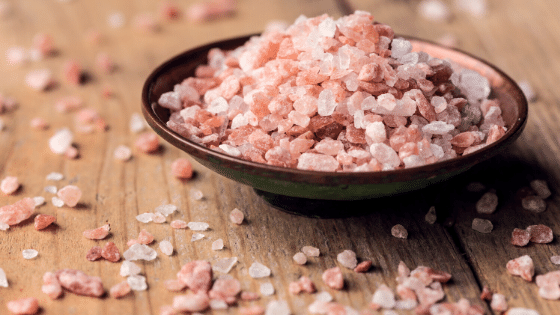 This is not the normal refined sea salt we use in our favorite recipes.

It is found and only mined in Khewra mine located near the Himalayas in Pakistan.

100 grams of Himalayan salt may cost you about 20 times of generic table salt.

It consists of 84 different types of minerals, which is responsible for its pink color, the rest 98% is Sodium Chloride.

It has also healing properties, its consumption helps in weight loss, reducing aging, and increase libido.

All these reasons make this Himalayan salt so expensive. This expensive poisonous fish served as a delicacy in Japan and China in the form of sashimi or deep-fried.

This fish can cost around 265 dollars per kilogram.

Most of the fugu species are poisonous(contain Tetrodotoxin) which can paralyze you and create respiratory problems if you have eaten it in a wrong way.

So only highly trained and certified chefs are allowed to cut. It is one of the world’s most expensive food in the world.

Grown in Japan, admired for both tastes as well as looks.

It will cost around 200 dollars each, are so expensive that these are given as gifts.

To grow these melons it needs constant, extensive care and attention because a scar can cause a decrease in their price. This rare honey only produced in New Zealand and Australia.

The cost is about 100 dollars for a hundred grams, which is 100 times more than the normal honey price.

This honey is expensive because of the Manuka flower which is rare also are the bees.

Destruction of forests and pollution has decreased production, so the cost of this rare honey gradually increasing.

Homarus Americanus and Homarus Gammarus are the two most expensive species of lobsters.

Found in America and Europe, though it was the food for the poor’s in the early 1800s, but now lobsters are found in menus of top restaurants and served as a delight.

The cost is around $38 for a pound and a half live Lobster.

These crustaceans are costly because of the increasing demand for seafood and lavish lifestyle.

Amazingly there are only 4 ounces of meat in a pound and a half weight lobster, Which makes this lobsters one of the most expensive seafood in the world. 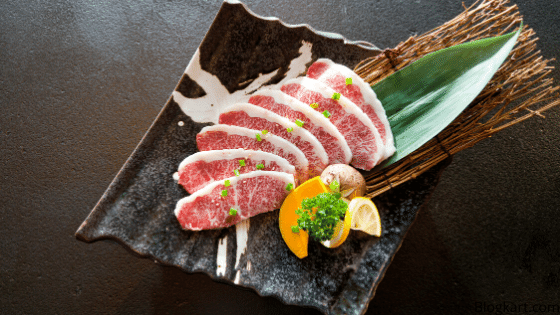 Wagyu is the common name for Japanese cow.

These expensive wagyu steaks made from Japanese beef.

Imported from Japan and cost about 230 dollars per pound for high-quality Wagyu, which makes it the most expensive meat in the world.

Priced for rich marbling and buttery taste and also rich in Omega-3 and Omega-6 fatty acids.

These meats are regulated and graded by the Japanese government, higher the grade higher the price. Served as a paste with Susi, taste very gentle and earthy.

Real wasabi is hard to come across and mostly grown in Japan.

Wasabi belongs to the family of mustard, horseradish, cabbage, and broccoli.

A kilogram of fresh wasabi can cost you 250 dollars, which is around 25 times more than the horseradish price.

It is one of the most expensive food in the world, because it is difficult to grow, needs constant running mountain spring water, shade, and stable temperature about 8 to 20 degrees Celsius. It is the liver of duck or goose, not the normal one and it is difficult to raise ducks than to raise chicken.

During the last two weeks of maturity, these ducks are force-fed, so the liver grows 10 times bigger than normal.

There is a lot of controversy and some places are banned preparing Foie Gras.

There are only 3 farms in the United States and 90% of the supply comes from the European Union.

All these above reasons make Foie Gras one of the world’s expensive food which costs 250 dollars a pound. Almas caviar of the Iranian Beluga Fish holds the record price of $35,000 a kilo which makes it the most expensive food in the world.

These eggs are extracted from Sturgeon fish.

They become sexually mature at the age of 8 years to 20 years.

This time gap is so big that they can’t meet the demand so the eggs become jewels of luxury food. 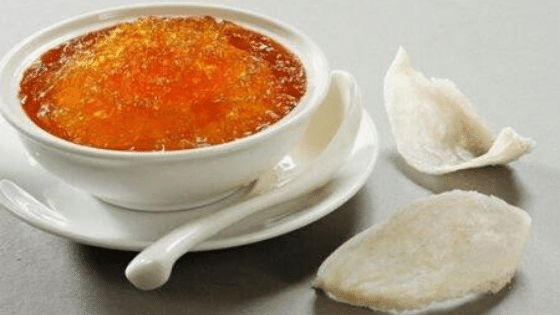 Chinese have included this soup in their appetite for thousands of years.

Now in Chinese restaurants serve it as a delight, It is a partially dissolved Swift bird nest made of its sticky saliva in cave walls.

It is believed to have healing properties like curing cancer and help children to grow taller, though it is 40 % protein. These are beans growing in vines native to Mexico.

But 80% of the world’s vanilla is produced in Madagascar.

Very hard to grow, takes 2 to 4 years to mature and its flower bloom only 1 day in a year.

All the flowers are thus hand-pollinated and vanilla pods need several months to cure after harvesting.

All this time consuming and labor-intensive work makes it the most expensive beans, which cost around 600 dollars for a pound. 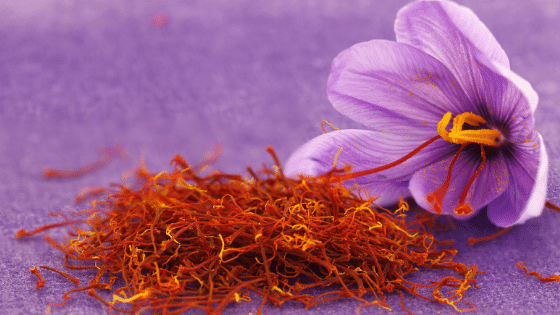 It is the most expensive spice sold at a whopping price of 5000 dollars for a pound.

To harvest saffron there is a lot of hard work, picking of flowers early morning, separating the stigmas, and then dried.

To make 1 pound saffron about 170,000 flowers are picked because there are only 3 stigmas per flower.

Iran produces 90% of the world’s saffron and also believed that it can help to reduce the effect of Alzheimer’s and depression.

During the middle ages, the monks around the parma city of Italy created this hard cheese.

It is also known as Parmigiano Reggiano Cheese.

These can only be made in Northern Italy because the bacteria needed in the preparation process are nowhere else found.

Made by only 3 ingredients cow milk, salt, and remnant.

One wheel of Parmigiano Reggiano needs 131 gallons of milk and takes a year to age.

Northern Italy is the home to the world’s only 329 diaries that make Parmesan Cheese.

A wheel of parmesan cheese costs over 1000 dollars which is double the price of cheddar cheese.

For all these reasons, it is one of the world’s most expensive food. The most expensive Potatoes produced only in Noirmoutier, France and available for only 10 days a year.

Costing about 12 dollars per kilogram, this rare food also tilted as “King of Potatoes”.

These are different from other Potatoes as they differ in their cultivation, harvesting process, and of course taste.

It is served in the finest restaurant all around Europe for their Chestnut taste. It comes in two different varieties.

These are fungus, these maybe not that pleasing to eyes but these are the most expensive fungus in the world.

Because this fungus cannot be produced industrially rather they grow naturally underground beneath certain trees like Oak trees.

Dogs and pigs help to sniff truffles out of the ground.

Truffle’s taste has a hint of garlic and also has a musky and intoxicating fragrance. Yes, the most expensive coffee in the world is collected from the poop of Weasel.

It is a Vietnamese delight and should be an experience in life.

Arabica coffee beans are selectively fed to this animal and they select the best out of the best.

The enzyme inside their stomach changes the bitter flavor to a strong, smooth and sweeter flavor.

The coffee poop is then collected, cleaned left for 6 months for fermentation and then roasted and grinded. The most expensive oysters are found in Coffin Bay, Australia.

Each of them cost around $100 each. In the 18th century, it was street food in London, Paris and New York. It was also called poor people’s food.

Pollution and sea contamination has lead to oyster eaters prone to diseases.

So the cost of the depuration process to clean oysters, shipping them live and a shelf life up to 9 days are the expensive reason. 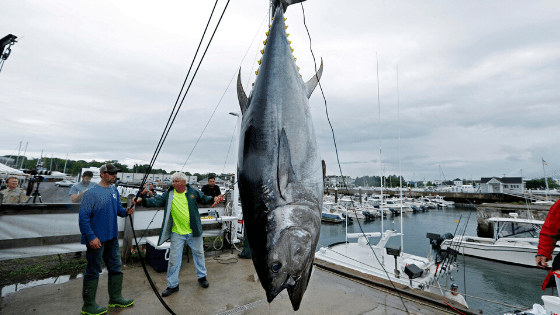 Japan is the biggest consumer of bluefin tuna as it consumes 80% of the world’s tuna market.

This fish is related to the Sushi culture of Japan.

It is the most expensive grade fish, also different parts of the fish are sold at different prices.

The highest price for a single bluefin tuna was sold in an auction in Japan for 1.3 million dollars which was further sold at $3600 per pound.

All these reasons make this bluefin tuna one of the expensive food in the world. According to the European Union’s laws, this Balsamico Vinegar can only be made in Modena, one of the two places permitted.

It is made from grape juice, to maintain its exclusivity only 10,000 liters are bottled per year.

The Vinegar is left in barrels and poured on to other barrels made of different wood every year to absorb different flavors.

One-tenth of the liquid evaporates every year and the density increases. More the density more is the sweet syrupy taste.

It is then examined for color, aroma, and viscosity.

A liter of Balsamico Vinegar cost up to $4000 which is equivalent to two whole cases of champagne.

For its sky soaring price, it is often called “Black Gold”. It has a common generic name as Sparkling Wine. Champagne is synonymous with wealth and luxury.

Often seen during the crowning of kings to the wedding of celebrities. Champagne is true if it only made in Champagne, France.

Northern France is the home to the finest vineyards and champagne cellars.

The difficulty of freezing temperature, cost of alcoholic fermentation, aging in cellars and the desire of the rich is what that takes champagne to the next level of expressiveness. Sekai Ichi in Japanese means the best in the world.

These are considered as the largest variety of apple which cost around $21 each.

Flowers are hand pollinated, apples are hand stamped and washed in honey, which makes it the most expensive apple to be eaten. This rare fruit is grown in Japan, each mango undergoes through extensive care and also organically farmed.

Because of the color, a mix of yellow and red, these mangoes are also called “Egg Of Sun”

A pair of those mangoes was once sold for a world record price of 3000 dollars.

For this unique variety, it is one of the world’s most expensive food. 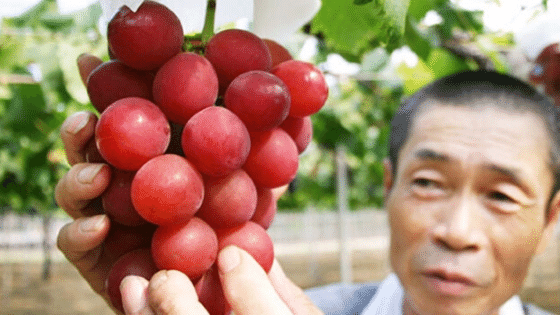 This bunch of 24 grapes is the most expensive grapes in the world.

These are perfectly round and extra sweet.

The record price for a bunch of grapes was once sold for 10,000 dollars.

This price is decided by a specific committee which also takes care that every bunch should be in perfect shape. Grown only around 10000 per year in a place, Hokkaido in Japan.

Compare to normal melons this rare watermelon flavor is much better in taste, crunchiness, sweetness.

All these reasons make this rare watermelon one of the most expensive food in the world. These are the most expensive nuts in the world, native to Northern Australia.

Given as treats in China and the United States.

It is commercially grown in Hawaii and exported to different places.

It takes 7 to 10 years for a tree to begin producing nuts and it is harvested by hands.

Due to the slow harvesting process, rich buttery flavor and 100% cholesterol-free fat content, these nuts are sold at 25 dollars for a pound about two times the cost of Almonds. 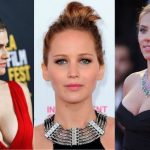 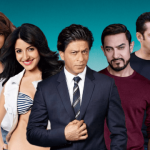 Team BlogKart 0
Blogkart team invites you to take a look at the list of richest actors in India. We all know that most of the Bollywood actors...